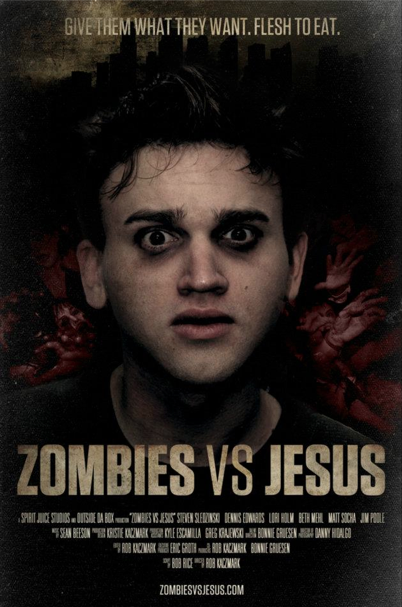 The zombies are coming.

I get to write a scripts for Outside Da Box. They asked if I could write something for teens about “the healing power of the Eucharist.”

My first shot at the script had a teen go through the day under constant attack: mom says he’s grounded for the weekend and then throws a grenade at him, girlfriend dumps him and then sword fights with him, etc. The idea is that he would be “beaten up” by his daily activity but then comes into the chapel and is healed and refreshed by the Eucharist.

But the script was deemed too violent. So I wrote a zombie one instead.

The short film will be out in the next few weeks, but there is already a fun buzz about it on Facebook. And if you’re just dying (or, more appropriately, undying) to know what happens, you can highlight the invisible text below to get a special SPOILER for the film:

Great twist ending, isn’t it? I think it will surprise everyone who sees it.

I’ll let you know when it comes out and post a link to it on this blog. I’m eager for you all to see it but even more eager to hear what you think. Until then, I will attempt to satiate your love for all things zombies with my favorite song about zombies (“re:Brains” from Jonathan Coulton) preformed by a guy dressed as a zombie translating the lyrics into American Sign Language. Because that’s what the internet is for.