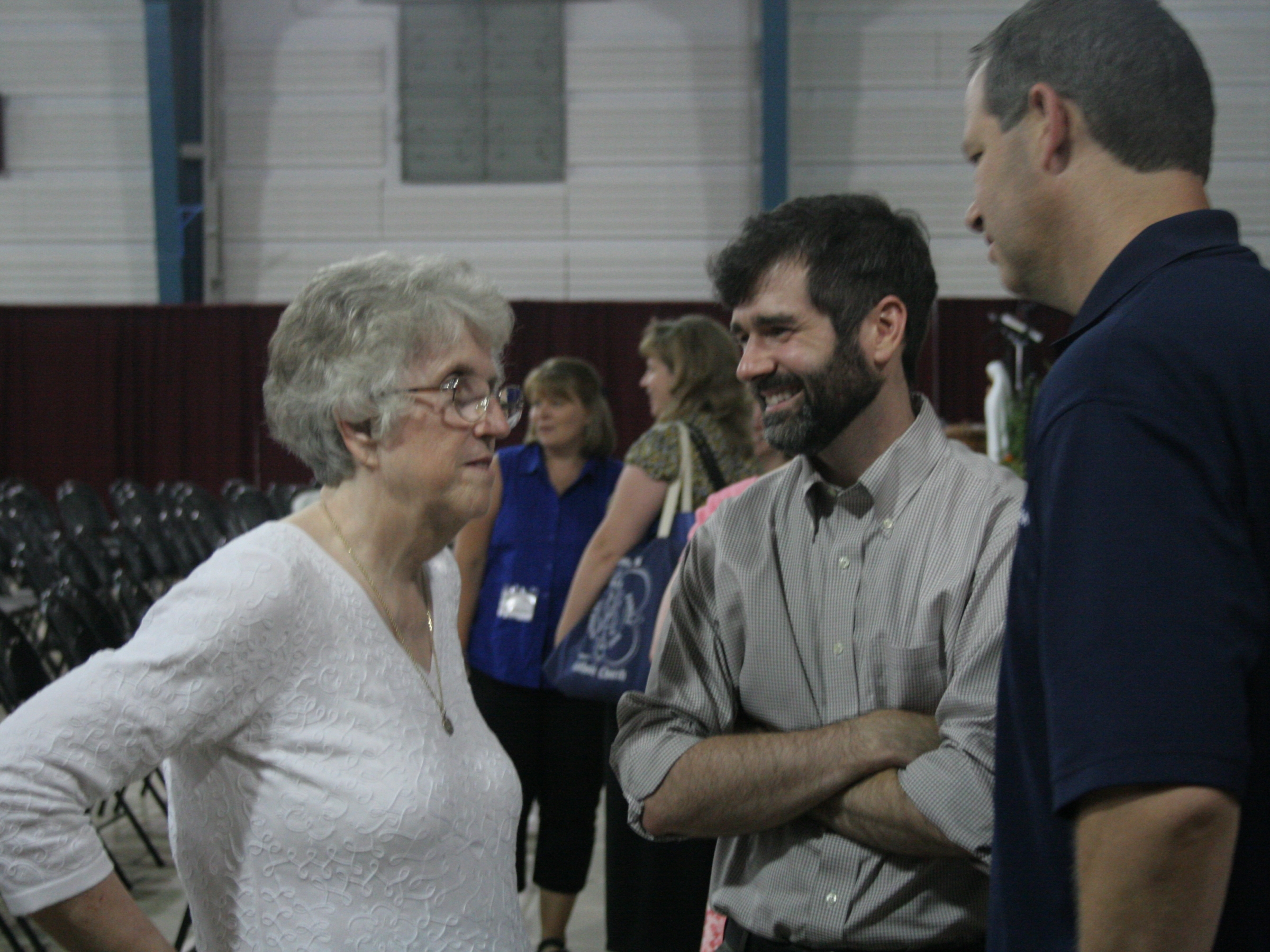 I moved to Steubenville in 1994. Though I got accepted into the Master of Arts in Theology program, it was only as a part time student. My main purpose, or so I thought, was to do youth ministry in the Steubenville area. I wasn’t even convinced I’d finish the degree! Though I enjoyed the classes I took, I must confess that I wasn’t giving my all to them.

Someone recommended I take her course, “Scripture, the Heart of Catechesis”. Having come from an evangelical youth group, I really liked the “Scripture” part of the title. The “catechesis”? Not so much. But a good friend convinced me that I’d like it, and even brought me over to her house to meet her in person.

I had been told she was a passionate and dynamic teacher, so imagine my surprise when I met an old grandmother sitting in a reclining chair. Her hair was curly grey. She had large glasses. She wore the kinds of shoes that one could probably only get through some kind of medical prescription.

In the classroom, however, she was on fire. You could see the passion in her eyes as she talked about the “delicious truths” of the Catholic faith. She would quote St. Paul’s command to “guard the deposit” as if we were soldiers heading out to war. She warned us of the need to take our studies seriously, and “beware of the millstone” for those who lead little ones astray. And she explained that catechesis was more than arts and crafts, more than a classroom experience. It was about leading others into intimacy with Jesus Christ.

I tried to fake my way through the program but she saw right through it. One fateful day, she called me into her office and challenged me in a way that no one ever had. She asked, “What would it look like if you truly applied yourself?” She impressed on me that it wasn’t about passing the class, but passing on the faith, and that deserved the very best of my effort and ability. I had buried my talents in the sand, but I should be having them multiplied.

Even after graduation, she continued to challenge me and encourage me. She gave me writing projects and ideas. She brought me back to Steubenville to give lectures. I remember when she said I would make a good teacher, and I laughed. Me? Teach? No way. She encouraged me to apply for a position I thought I’d never get, and then advocated for me to get hired even after I pretty much botched the interview.

Barbara had a way of seeing things in people that they couldn’t see in themselves. I’m not the only story. The majority of our Catechetics faculty were her former students and share similar things. She formed hundreds of men and women who went out in to parish or diocesan leadership, many of whom would say, like me, “I wouldn’t be doing what I’m doing if it wasn’t for Barbara Morgan.”

I got a call on Tuesday telling me that she had passed away. Over the twenty-five years I was privileged to know her, she was afflicted with a variety of medical issues, many of which were difficult to diagnose. She was truly a suffering servant.

The next day I said a prayer by her old office. I could almost hear her saying, “guard the deposit!” from the other side of the door. And then I smiled as I went to teach my next class… “Scripture, the Heart of Catechesis”.

Though she has passed, Barbara Morgan is still teaching at Franciscan University of Steubenville. Her voice echoes in the classrooms through her students who have since taken her place. Her vision lives on in numerous parishes and dioceses where our alumni do ministry. Her one voice has transformed into a thousand; her shaky speech into a deafening roar. I’m honored to be a part of the chorus she left behind. I pray that, like her, I would proclaim the Good News, guard the Deposit, and lead others into intimacy with Jesus Christ through everything I say and do.

Well done, good and faithful servant. You are loved and will be missed. Enjoy your heavenly rest.

Would you please say three Hail Marys? One for the repose of Barbara’s soul. The second for her family, especially for their holiness. And the third for the catechetical mission that Barbara started at Francsican, that we would continual to be faithful to that. Thank you!

← Calling all in youth and young adult ministry!
Holy Land… for Haiti! →

Really says it all, doesn’t it?
Let’s go Cavs! #letemknow
Fr. Bob and Dcn. Dave talk World Cup soccer, college football, their favorite beers, recent movies and plays they have seen, and begin their four part series on “Why did the Word become flesh?” And yes, I know the names are backward. When you listen to the episode, you'll get it.
Let’s go Pens!
Speaking With Deacons is back! One year later, I reflect on the difference of doing ministry before and after ordination.
"Bury Me in Burkenstocks": Fr. Dave and Dcn. Bob discuss Our Lady of America, Bob’s first Baptism, the World Cup, “sportswashing,” and the passing of Fr. Dominic Scotto, TOR.