I’m flying high from a successful defense of my dissertation yesterday. Literally, I’m flying on a plane home from England as I’m writing this. And by the way, that is the proper use of the word “literally” because 1) it is not a metaphor or exaggeration and 2) I wrote it down.

I guess I have to be picky about my language now because, well, I have a PhD! Honestly, for most of my life I never thought this happen and some things that happened in the past few months really made me concerned that it wouldn’t. I knew the process of getting a doctorate would be a lot of work, but didn’t expect the emotional rollercoaster that it became.

The lowest point in the journey came just a few months ago, in January, when I thought I had submitted my final draft. I had mistakenly thought the dissertation was to be 60,000 to 100,000 words and that examiners preferred shorter dissertations over longer ones. My different supervisors read various chapters at a time but nobody saw the whole thing until I put it together and sent it out. It was a little shy of 60,000 words. I immediately got an email asking where was the rest of it, and did I know it was supposed to be between 90,000 and 100,000 words?

I was on a plane to Florida when I got that email. I began to cry. After working four years on this, how was I supposed to come up with 50% more content? Plus, I had some pressures at Franciscan (at the time) that meant I needed to be finished by MAY.

Though I tried to be prayerful throughout the whole process, that was a moment of true surrender. I thought of the young boy who gave his five loaves and two fish to Jesus. On its own it wasn’t much, but Jesus did something incredible with it.

Over the next six weeks, I lived in my office, working crazy hours. I often went to bed praying that angels would keep typing for me while I slept. I was blessed to have a number of speaking events that let me hide in a corner and continue to write. Numerous friends comforted me with words of encouragement and constant prayers—I can’t tell you what that support meant to me! By early March I felt like the dissertation was really strong, better than it had ever been. I checked the word count… 95,000 words. An incredible blessing from God!

My supervisors signed off on it, but warned they didn’t think it was quite ready enough. There are a number outcomes for the defense of a British PhD: the award is given right there, the need for minor modifications (three to six months), the need for major modifications (six months to a year), the need to resubmit and try again, the granting of a second Masters degree (with its own category of minor and major modifications), and complete fail. Obviously, the last three categories are the nightmare (I had that nightmare more than a few times). My supervisors suggested to expect certainly minor and likely major modifications. I wasn’t so concerned about potential minor revisions—we had been cautioned since the beginning that a very small percentage of students gets away with a direct award—but the major ones could keep me busy for up to another year!

Another different thing from the British PhD system is that, unlike PhDs in America or much of Europe, you defend in front of strangers, not the people who helped you write the dissertation. They think this makes the defense more rigorous, as there could be some bias with those who know you and have already given input on the thesis. (This is not at all to suggest that American and Europe PhD defenses aren’t extremely difficult! But I think the way England does it is far more terrifying—and my friends with PhDs from the US agree.)

So yesterday I found myself at a moment I had envisioned for the past five years—the defense of my dissertation. That morning I prayed in the Sacred Heart Chapel that Blessed John Henry Newman had built (pictured above). I offered Jesus my loaves and fishes, knowing it wasn’t much but it was all I could do, and prayed He would do something amazing with it. Then I prayed a rosary, not to ask for help, but in thanksgiving for what I knew God would accomplish. He didn’t bring me this far to leave me.

I was escorted into the meeting room, met my two examiners, and we talked about my dissertation. The time flew by. They pressed me on a number of issues, but overall seemed satisfied with my answers. It was a really amazing conversation with other scholars about my work. I actually enjoyed myself!

Then I was told to leave while they discussed. My supervisors were in the other room, with my wife, all eager to hear how it went. I said I thought it went well. Dare I hope for minor modifications?

I was asked back in and was told the incredible news: award directly given, no need for modifications. “Congratulations, Dr. Rice.” I was so stunned I had to ask him to repeat it. My supervisors were shouting for joy. It was an incredible moment I will never forget in my life. 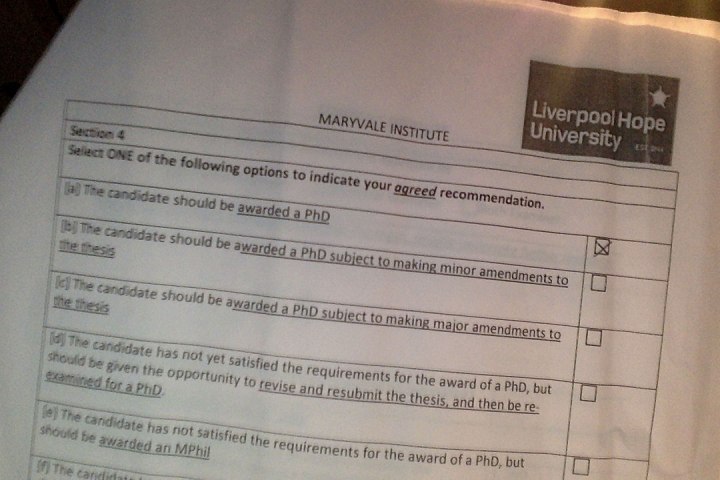 One of the great blessings of that moment were I the people I knew were there with me in spirit. One of my closest friends sent me an email before my defense: “Know that as you sit and begin to present – the sudden calmness you will feel rushing over you – is the love and faith of so many people who hold you in prayer.” That is exactly what happened.

So know you can call me Dr. Bob Rice, an achievement that happened through a lot of hard work, the support of friends, but most of all through the providence of God. I pray (and have confidence) that God will use this to continue to further the Kingdom. To Jesus be all the glory!