Apparently, I have a perfect track record when it comes to calling what the gender of our kids will be. I don’t actually remember that to be true, but my family says so. So when I felt pretty strongly that we were having a boy, but the ultrasound tech was “absolutely positive” it was a girl, I figured five out of six wasn’t bad.

But the streak continues…

Labor went smoothly, and thanks for all your prayers. When the baby was born, they asked us if we had a name. We said we weren’t totally sure, but we were thinking, “Felicity Rose.” The nurses looked at each other with an confused look and  the doctor responded, “Uh… that’s a funny name for a boy.”

I abruptly did some manly fist pumping in the air to celebrate my surprise son. Cheers and laughter ensued, even with Jen, which shows how much of a trooper she is.

So then the question… what is his name?

Between Facebook, Twitter, and texts messages, I think friends and family have suggested every name ever. But the whole thing was a bit overwhelming, so we decided to sleep on it and pray about it in the morning.

Well, we’ve slept. And we’ve prayed. And we are proud to announce to the world our new son, Aidan David Rice.

Aidan is a beautiful Irish name of many great saints. But the thing that tipped it for me was when my friend, John Magee (who is from Ireland) said that Aidan (which literally means “fire” in Gaelic) was the Irish for Moses. Not finding any proof of that on the Internet (the bastion of all that is accurate) he shared that a wonderful, holy, and sweet Franciscan friar we both knew (his name was Aidan, too,) said so. And that’s enough for us.

David was “a man after God’s own heart,” a musician, and was never afraid to be “undignified” for the Lord. I’m also friends with a guy named Fr. Dave, who isn’t too bad of a guy, I guess.

And as a catechist, I love having a son named after two of the greatest figures in the Old Testament. Moses and David  brought a deeper understanding of God to the Israelites. I pray my son Aidan David will do the same for the world.

Thanks for all your prayers and the outpouring of support we’ve received. We’re all doing great!

Well, almost everyone. My two daughters aren’t too happy with this. And then there’s all the girly outfits and dresses we bought… 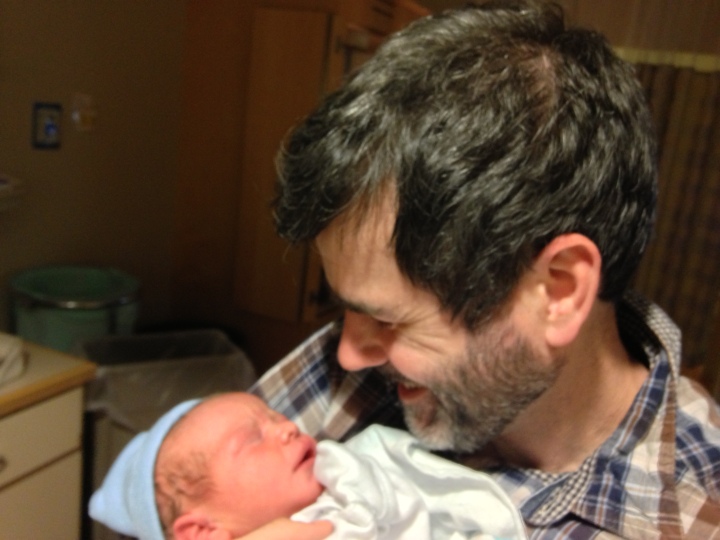 Watching my favorite basketball team with my best friend, celebrating my birthday! @cavs
These seats are okay... #gocavs
Stay classy, Cleveland! Let’s go Cavs!
I CANT BELIEVE I GOT THIS SHOT!
Having an amazing day with my beautiful daughter!
Ready for my big day...