Small (Flower in Your Garden)

This song is based on the simple spirituality of St. Terese of Lisieux. It features Andrew Laubacher on guitar and Matthew fox on the violin. I’m actually impressed it came out as well as it did—I just used the iPad’s built in mic and it’s pretty clear.

I tried to record it in my backyard but it was too windy that day. So right after doing a Saturday AM set with a youth conference, Matt, Andrew and I went to “Kelly’s Garden,” which is just outside the student center at Franciscan. Kelly Roggensack was a sophomore who died in a car accident on the way back from a cross-country track meet. I thought it was a fitting place for this song.

I’m planning to record it for my new CD, “The Gospel Accordion to Bob Rice,” but I’ll be honest—I’m getting a bit worried that it might not happen. I’m half way into the kickstarter campaign with less than a third pledged, and there hasn’t been a lot of new activity the past week or so. Not being able to publicize this at the conferences has been a significant fund-raising blow.

But God is big. And I am, well, small. Or at least, I’m trying to be. If you haven’t yet made a contribution to the CD project, you can do so HERE (I also uploaded a new promo video which does a better job describing the project.) Any help you can give is greatly appreciated.

I want to be a flower in Your garden, I want to be a star within Your sky
I want to be a member of Your body, I want to be a singer in Your choir
And I want to be just one word within Your story, I want to be faithful to Your call
Oh, to be a single note within your symphony! Father, teach me how to be small.
And still I try to compare, worry about who’s better than me
I see others as competition, You see us as community
Am I diminished by the beauty that’s around me or am I part of Your great tapestry?
Meek and humble of heart, meek and humble of heart…
Sometimes I think that the world revolves around me
And it’s all about me being the best
Then I’m reminded You’re the hero of this story
I am the damsel in distress
If I seek You will You take care of all the rest?
Oh, to be a single note within Your symphony!
Who am I that You should care for me at all?
Yet you tell me to be part of that great litany
Is to be the least of all
Teach me how to be small 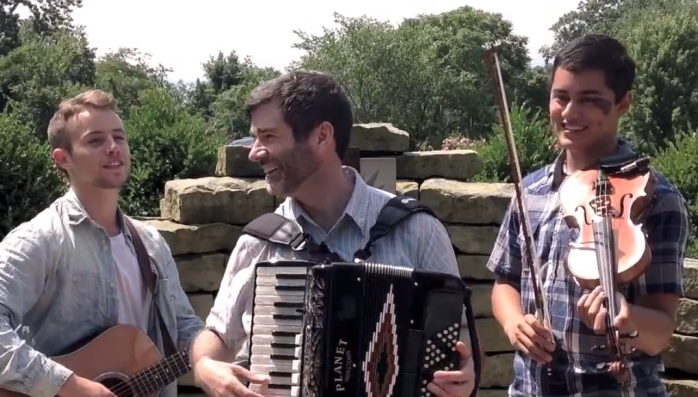 4 Comments on “Small (Flower in Your Garden)”

"Bury Me in Burkenstocks": Fr. Dave and Dcn. Bob discuss Our Lady of America, Bob’s first Baptism, the World Cup, “sportswashing,” and the passing of Fr. Dominic Scotto, TOR.
Today I celebrate my first year anniversary as a deacon. Praise God! So grateful for all the love and support, especially from my wonderful family.
Sweet! Thanks for all who listen!
Such a joy to do my first baptism with @jpvamusic Miriam Jane Von Arx! Though not in the best circumstances. Please pray for Miriam and her family as she has some holes in her heart that we hope will heal themselves without the need for surgery.
My son scored the winning goal in the championship soccer game!!! So proud and happy for him and the team!!! ❤️ @franciscanuniversity
So excited to be at our first Cavs game of the season! @cavs #letemknow