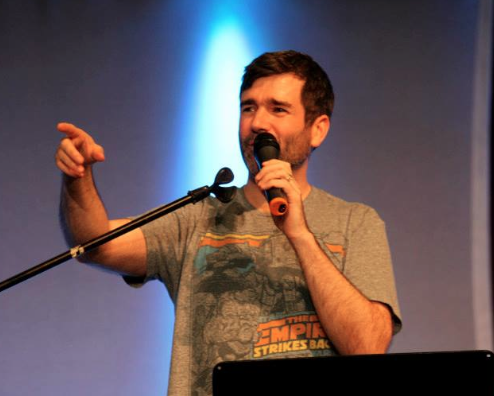 It was the summer of 1994 when I first set foot on campus at Franciscan University of Steubenville, Ohio. I had been hired to speak at a Steubenville Youth Conference, something I hadn’t even heard of until a few months before. At that time I had been playing concerts and working at an improv comedy club in Orlando, Florida, “The City Beautiful.” So pulling into the polluted air of “The City of Murals” was quite a shock. “I could never live here,” I thought.

And somewhere up in heaven, God laughed.

That was the first summer Steubenville had two youth conferences. Other locations for youth conferences hadn’t started yet. I was there to help a group of students called the “Work Crew” (which later became “Young Apostles”) and do some comedy to lighten the mood of the weekend. I and another friend dressed up like friars—I was Brother Steub, he was brother Ville, and together we were Brothers Steub and Ville. We kept saying things like, “Back in Vatican I, before there was a sequel, we didn’t kneel on grass. We knelt on broken glass! And we loved it!” Oddly enough I got asked back the next year. And the next. And I’ve been involved in youth conferences in almost every different role a guy can do (speaking, hosting, entertainment, giving workshops, speaking at men’s sessions, I even spoke at a women’s session once, and leading music)  for the past 20 summers. It has been one of the greatest blessings of my life.

That first summer, I heard our blessed Mother speak to my heart while I was praying the rosary. She told me to drop everything and move to Steubenville. I didn’t hesitate—I knew God’s will was always the best. I thought it was to do youth ministry, but God had even more planned for me. I completed my Masters in Theology and met my wife, who I married in the campus chapel in 1997. And after 7 years of youth ministry in Latham, NY, Franciscan asked me back to be a part of the faculty to teach about two things I was passionate about: Scripture and Youth Ministry.

I took over the music ministry for the on campus conferences in 2005. Once again, it was something I never expected to do. I had done plenty of concerts before, but lead an entire weekend of worship? I had spent the previous years hosting conferences and really enjoyed doing that. But once again, I knew God’s plan was the best, and I’ve been so grateful to play music that has blessed tens of thousands of people!

This summer the conference office wanted to audition a new worship band and asked if I wouldn’t mind hosting the conference instead of playing it. I love doing music but I was thrilled to have a chance to host again—I hadn’t done it in eight years. And by God’s providence, that was the first conference that my oldest son was attending. Jon Niven (the musician for that conference) invited me on stage on Sunday AM to play one of my “classic” songs: Behold the Lamb, the theme song from 1997. For me, it was the perfect ending for that weekend, and a great moment of nostalgia as I thought about the 20 years I’ve been blessed to sing and speak from that stage.

I few years ago, I got over the shocking revelation that I had been doing ministry longer than all the teens in the room had been born. I don’t feel old at all—I feel young. I love sharing the love of God with young people, using every talent I’ve been blessed with.

I got asked a number of times, “which do you like better, hosting or leading worship?” Do I have to choose? I’m thrilled to do them both. But I have to admit, there is nothing more exciting for me than to tell people about how Christ died for them and be the person who gets to invite them into a deeper relationship with Him. I had a chance to do that this summer, and I’m grateful for the friendly folks at steubenville.org who caught it on tape: