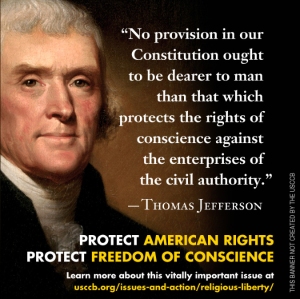 Ten years ago, in the midst of a well publicized sexual scandal, it was tough to show your pride in the American Catholic Church. Story after story flooded the news of abominable actions done by priests while some bishops and cardinals seemed to purposely look the other way, allowing further abuse to incur. I remember listening to a heart-breaking homily by a pastor who wept as he shared how he instinctively took his collar off when someone came from behind him and asked if he was a priest. It was a difficult time.

We who were faithful knew that the Church was more than the media portrayed and that those who did such things didn’t live up to the teachings of Christ or the Church… but such beliefs paled to the stories of those victims whose lives were ruined by the abuse they received. One wondered if the Church would ever have a voice in America again.

After a decade of repentance, penance, and changes in both personal and policy, the American Church is once again earning the right to be heard. With new faces in the episcopate such as Cardinal Dolan of New York, the United States Council of Catholic Bishops is once again picking up the shepherd’s staff to proclaim the truth and protect the faithful.

Reciently, the USCCB published a document titled, “Our First, Most Cherished Liberty” about religious freedom in the United States. It’s a powerful statement and I’d encourage everyone to take a look at it. It speaks against the HHS mandate in the strongest language possible. As Vincent Phillip Muñoz from the Weekly Standard wrote:

“The bishops call on Catholics in America, ‘in solidarity with our fellow citizens,’ not to obey the law. They implicitly compare the HHS regulation to a segregation-era statute, and even cite Martin Luther King Jr.’s ‘Letter from a Birmingham Jail.’ In a not-so-subtle manner, the bishops tell the Obama administration that they are willing to go to prison rather than comply with the mandate’s provisions.”

But the document is not just about the HHS Mandate. It shows that this is just the latest in a pattern of attacks on religious liberty in America, citing issues from immigration, adoption services (for Christian agencies who won’t place a child with a homosexual couple,) and discrimination against small church congregations and students on college campuses.

The examples aren’t just about Catholics because the Bishops want to speak to a larger issue than just theological distinctives within the Church. They write, “This is not a Catholic issue. This is not a Jewish issue. This is not an Orthodox, Mormon, or Muslim issue. It is an American issue.” And then the document highlights how religious freedom is at the heart of our constitution and our history.

Simply put, this document is a line in the sand. The USCCB has said “enough!” and is calling all people of faith to stand with them and fight these unjust laws. It is clear they’ll do whatever it takes to make it happen.

How can we join them?

1) Pray. They specifically suggest that the fourteen days from June 21st to July 4th be a time of intense prayer for all people of faith.

2) Talk about it. Many Catholics don’t like mixing Church and politics, thinking it goes against our country’s “separation of church and state.” But ironically, this is exactly what we want! We don’t want the state telling the Church what to do, what to believe, who to employ, or how to live out her mission. Post things on your Facebook wall, write blogs (I’ll keep writing about this!), tweet… use all the advantages of social media to let others know the truth of what is going on.

3) Write your senator and congressman/woman. Yes, it sounds cliche, but it needs to happen—especially as we come to an election year. Let those who represent you know how strongly you feel. Send emails, attend rallies, write letters, and vote in a way that will protect religious liberty in America.

I’m proud of our American bishops for taking such a stand. Let us pray they will stay strong in the face of adversity and that God would use this to unite people of faith everywhere so that we may truly be “one nation under God.”